Kicking Butt at Crossfit and Loving Every Minute 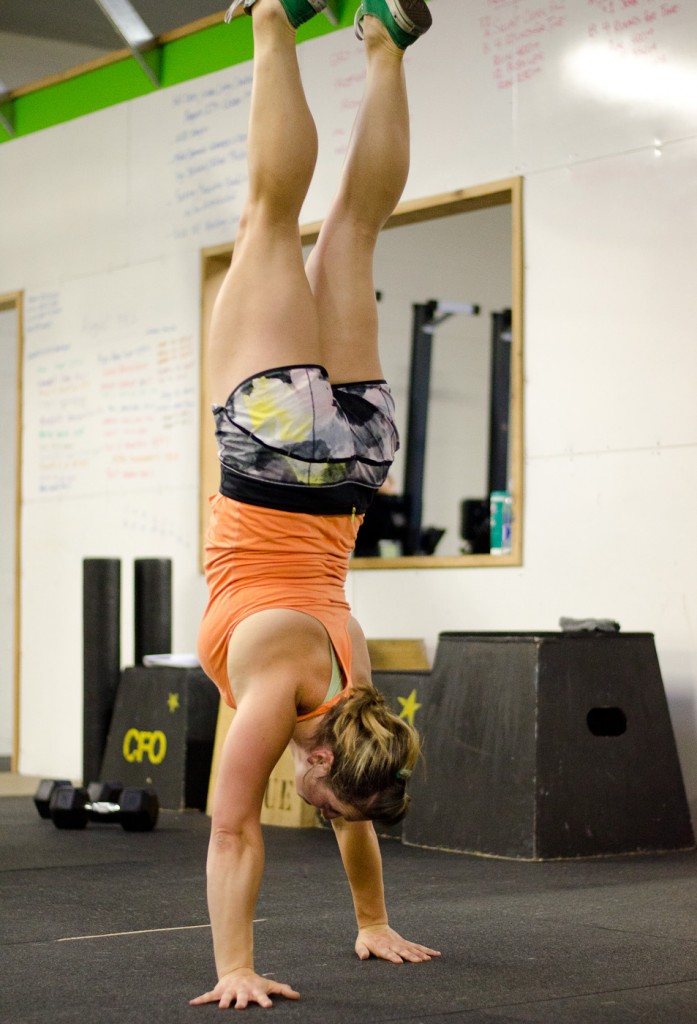 I started Crossfit exactly one month before my 29th birthday in August 2010. I was living in North Lake Tahoe and had been hearing about Crossfit from a number of friends, including one friend who was able to finally quit smoking and who totally transformed himself all in a couple of months. His results were inspiring, and I had also heard you got to jump around on things, swing on other things, and get upside down. I was so in! Those first couple of days I wasn’t sure I’d be able to make that five minute stroll home because I was so frickin’ sore.

I’ve always been active in a variety of different types of exercise, including cycling, triathlons (I can barely swim and I hate to run) Tae Bo, P90X, and more, but none were able to garner my short attention span for long. Crossfit has complemented my A.D.D. perfectly because there are literally hundreds of skills, movements, and lifts not just to learn but also to get the technique right. There’s little time for boredom with Crossfit and I always have a list of things I want to accomplish; some of it is improving technique, some of it is doing a skill for the first time, and somewhere on that list is to run more, too.

END_OF_DOCUMENT_TOKEN_TO_BE_REPLACED

How I Got (Really) Fit in my Fifties and Beyond

I’m 65 and I’m an athlete. No, I don’t do anything amazing like running ultra marathons. I’m just gym-rat fit. It feels good, and I look good, too. It wasn’t always that way.  You see, I was born pre-Title Nine. I grew up smoking with friends rather than working out with them.  In my 30’s I quit smoking and began working out. I ran, lifted weights, etc. Eventually, I even did a mini-triathlon, but I was erratic, either fit and slim, or out of shape and gaining weight, too busy with life. Working full-time, raising kids and driving them to their sports, I was so worried about their achievements; I didn’t make time for myself.

END_OF_DOCUMENT_TOKEN_TO_BE_REPLACED

Life Lessons in a Years Worth of Roller Derby

Our Creative Project-Managing whiz Danielle, stepped out of, WAY out of, her comfort zone and  joined a women’s roller derby league a year ago. Below she shares with us some life lessons and with wisdom like this Danielle, it sounds like you’re on the right track. 🙂 Keep it up! You rock! 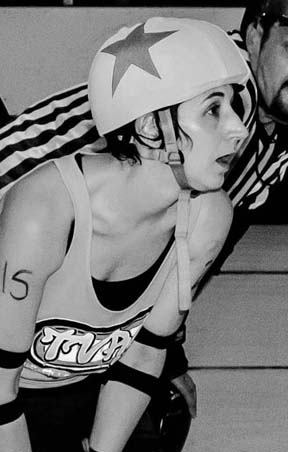 A year ago, I decided to join Reckless Rollers, the rec team for the Bay Area Derby Girls Roller Derby league. What started out as something fun to try has turned into one of the best experiences of my life. I have bonded with a family of women who have taught me so much and to whom I have a fierce loyalty to like no other group I have ever encountered. I love my derby sisters like family, and I have learned and continue to learn from them on a daily basis. The support system that the B.A.D. girls foster is unlike anything I have ever experienced, and I am forever grateful. While it hasn’t been an easy road, and my learning curve is a long one, it has been an amazing road to travel.

END_OF_DOCUMENT_TOKEN_TO_BE_REPLACED

Finding Oneself in Leading Others

This post was created by Amy, a Marketing Coordinator for Title 9 and enthusiast for all the things Title 9 stands for – including most important of all, it’s customers. If you have an idea for a post or would like to connect with Title 9 shoot her an email.

Already our 3rd Annual Bay Area Title 9K is coming up next month which makes me realize that its truly incredible how things pan out. Two months ago I had no idea that I would be lucky enough to start working with the Title 9K team, and on top of that, meet the people that I have. One gal in particular, Miss Irma, has blown me out of the water. In my attempt to market the race in any way I could I found a local running club in San Jose and reached out to their director in hopes of something, anything. Little did I know on the receiving end was an energetic, kind, and motivated mother passionate about running with others. I’ll stop now and leave you with Irma’s rendition of the birth and development of not only the Mom’s Run This Town San Jose chapter, but Miss Irma herself. Cheers my dear, here’s to you.

Every person experiences life changing events (LCEs) in their life – both positive and negative.  As a social worker and runner, I firmly believe in the power of exercise to undo the negative effects of LCEs.  I started running after I got married not only because I needed to lose weight, but to do something that was just for me, amidst the togetherness of a committed relationship.  I continued to run through the pre-mature deaths of my twins, Lucas and Larissa, and then after the births of my daughters, Sophia and Samantha.  As a mom, running took on new meaning. I wanted my kids to know that “being healthy” doesn’t just happen – you work hard for it, like everything in life that’s worth working for.

I thought I would be done with any significant LCEs until my kids went off to college.  Wrong!! Last year, my husband got a job in the heart of Silicon Valley, San Jose, CA.  The stress of moving across the country and being away from all our family and friends took a toll on me – I gained 15 lbs and had the hardest time adjusting to our new life here.  So, I started running again after the holidays. The problem:  running alone is not my forte and the runs for the local running groups didn’t fit with my schedule.  If I were to run first thing in the morning or after work hours, I would have to bring sleepy and/or hungry kids in the jogging stroller. And who wants that at their 7 AM run or 6 PM run?  Not me – and they’re my kids!

What was a running mom to do?  Enter Moms RUN this Town (MRTT) – a FREE nation-wide running club for moms, by moms.  The name intrigued me because I believe moms (and women in general) run the world and if we had the opportunities to do it on a larger scale, the world would be a much better place.  Since there was no chapter in San Jose, I contacted the founder and found myself as the new chapter leader of Moms RUN this Town-San Jose!

At first, I recruited moms who I became friends with through my kids. Mid-morning, we would run with our jogging strollers, then let the kids out to play and have lunch.  Exercise time for mom and the kids get a play date – a match made in heaven!

My first consistent running partner was Ellen, mom of 2, who hadn’t run for over 5 years.  Yet, after only 2 months, we completed a 5K in less than 35 minutes – a PR for both of us!    After that race, MRTT took on a whole new meaning for me.  I made up some fliers and put them out at local running stores, coffee shops, supermarkets.  Then, I got really bold and started handing them out to women I saw running or walking with a stroller or with kids. I became part of a larger group of like-minded, strong moms who did RUN their corner of the world.

Junella, has young four kids, works part-time, and gets up at 5 AM to run since she is training for a marathon and a 5K obstacle run in October.  Patricia, who has grown kids, has run/walked a half marathon every month since June of this year.  Melanie is mom to a 4-legged “kid” and is training to run her first marathon this October.  Truc-Co last ran in college (over 10 years ago, but she’ll tell you it was only 5 years ago!), yet since joining MRTT, she has been running 3-4x/week while pushing her 2 year old in a jogging stroller!  She has signed up for the Title 9K (her 1st race), a half marathon and a 5k obstacle race.  She has also perfected the art of opening snacks and juice boxes and picking up various toys that have been tossed out of the jogging stroller all while maintaining a 9-10 min/mile pace.

In the 3 months since our group started, we’ve grown to include 30 women with varying running backgrounds (1st time run/walkers to experienced racers) and in various stages of motherhood (1st time moms with new borns to older moms with grown kids).  We’ve created a community of running moms who inspire and support each other. Every time I log on to our Facebook page and read their posts and comments, I am humbled by their strength, dedication and kindness. We each know what it takes to make the time to run when you’re a mom.

For me, MRTT was what I needed to get back on track to the healthier life I wanted to have.  It was not just the physical act of running that helped to mitigate the negative effects of my LCE.  It was the social, mental and emotional connections made through running (and specifically from running with other moms) that contributed to my life adjustment and satisfaction.

When I found out about the Title 9K race series, I thought it would be a great first race for our newer-to-running moms but also for our seasoned-running-moms.  The fact that it was for women only and accommodated strollers was a bonus! Most of us have only run with strollers and most races don’t allow them.  Also, having it be all women gives it more of that community, “we’re all in this together, no matter what your pace may be” feeling.  Lastly, since 9K is not usual race length, we’re all sure to PR!!

MRTT, Title Nine and the Title 9K Race Series all have the ideal of women as powerful and influential at their core.  We matter – to our families, our communities, our countries and the world.  Our lives are full of LCEs
that can threaten to stop us, but the rhythm of running keeps moving us forward one step at a time.

If you’re interested in joining Mom’s Run This Town San Jose you can find their information here. Live in another part of the country? Find your local chapter here, or become an Irma and start your very own!