Everyone has a story about how they fell in love with running. Here’s mine. It’s long, just like a good training run on a Saturday morning…

I usually don’t make New Year’s Resolutions, passing them off as trite, meaningless promises we make to ourselves but easily forget about when the hangover wears off and we’re faced with the reality of life again. “I’ll go the gym everyday, eat healthy and try to be a more positive person at work. And I’ll volunteer for Big Brothers/Big Sisters.” The first two weeks, we hit the gym every day, eat according to the Food Pyramid and grumble less at work. We call Big Brothers/Big Sisters for a brochure. By week four, we go to the gym twice a week, eat whatever we want to on the weekends (we are working out after all…we can eat what we want to, right?) and the Big Brothers application sits on the desk with our name and address filled out. By the end of February, we consider walking to the mailbox to be our daily “workout” and the lettuce and tomato that comes on our daily cheeseburger counts as two servings of vegetables.

But I have friends who like to make resolutions, so each year I listen to their latest aspirations with mild interest, resisting the urge to mock them. Last year – January 2003 – was no different and I listened as my friend told me she wanted to run a marathon. She even asked me if I wanted to join her.

Was she insane? Did she really think I could run 26.2 miles? Did she really think I’d WANT to run 26.2 miles? Why in the world would anyone want to do that? Four, five hours – or more! – of running. RUNNING. Where was the joy in that? What was so fun about that? She must have hit her head on something and she was confusing me with someone else she knew. Had she noticed the look on people’s faces as they cross the finish line at these events? They look like they are being tortured. And there’s a reason for all those medical people stationed along the route and at the finish line. Needless to say, I declined her offer with a “in a million years, no way am I running a marathon.” She convinced her then-boyfriend-now-fiance to join her instead.

On some level though, her personal challenge inspired me. I decided to get serious about fitness once and for all. I was tired of being unhappy with my physical appearance. I wanted to feel good about my body for a change. It can be embarrassing when people discover that I have a Master’s degree in Exercise Science, but that I hadn’t been to the gym in three months. And I decided that running wasn’t such a bad way to get in better shape. 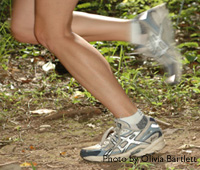 I incorporated running into my weight-training schedule. My initial goal was to get to two miles in the 30-minute time limit I had on the treadmill at the gym.

And I got there in no time at all. I was amazed. So then I pushed for three miles in 30 minutes. And again, it happened. But I hated every minute of it. I looked at the clock constantly – glared at it, hoping that somehow the daggers shooting from my eyes would force the numbers to move faster. I would have to reduce the speed and walk fast to catch my breath and then I’d kick it back up. Was the 30 minutes up yet? Was it time to go home yet?

I needed a goal, something to motivate me, hold myself accountable. There was a 5-mile “walk-a-thon” that I participate in each year and I had told myself that I was going to run it this time. I hadn’t run more than 3 miles in over ten years, but dammit, I was going to do it.

I recruited my marathon-training friend to join me. I spent a few weeks “training,” trying to work up to five miles, but I had no idea what I was doing and ended up getting sick and being out-of-service the week before the “walk-a-thon.”

It was a rainy, wet, cool April day. Steady, slow drizzle kind of rain. She and I hit the dirt (State forest trail) and I let her set the pace. I definitely had too much clothing on and started pulling the layers off. Overall, it didn’t feel too bad and that surprised me. It was actually nice to have someone to run with and talk to. 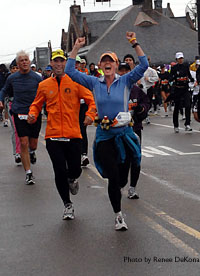 Then I got really, really hungry. Really. Really. Hungry. At the turn around point, I had to eat. Oranges. Twizzlers. Anything they had. And I drank a ton of water.

We ran back and I was hungry again! But I felt great. Invigorated. Proud to have run five miles. Beaming from ear to ear. I was amazed that I had actually done it. I basked in the glow of my accomplishment for an hour and then it happened. It hit me like a ton of bricks. I fell sound asleep for two hours and woke up with an incredible headache. (Looking back, I realize it was from dehydration.) But, I was back on the treadmill a few days later and looking for a new goal.

This, of course, led me to discover half-marathons and other distances that I could imagine actually finishing. I ran my first race in August – a 5 miler. I started reading books, magazines and anything else I could get my hands on to learn more about running. I bought new sneakers and breathable clothing. I got myself a FlashFlo for hydration on longer runs. I turned into a running nerd. And I continue to love every minute of it – the good, the bad and the ugly.

Oh yeah…two more thing. I really do wear an orange hat (or visor if it’s hot) – especially on race day. And I haven’t signed up for a marathon yet, but it doesn’t seem nearly as impossible as it did a year ago. Never say never.

Republished with permission from “The Running Chick With the Orange Hat” blogspot.You can read more of Dianna’s blog at: http://runningchick.blogspot.com/
Wanna share your story?