Title IX at 45… does it still matter? Missy Park our CEO & Founder posed this question to Billie Jean King, the Titan of Title IX herself. Together, they discussed the lessons they learned on the court and how the power of sports goes far beyond the playing field, out to our board rooms, war rooms, and yes, someday even oval rooms. 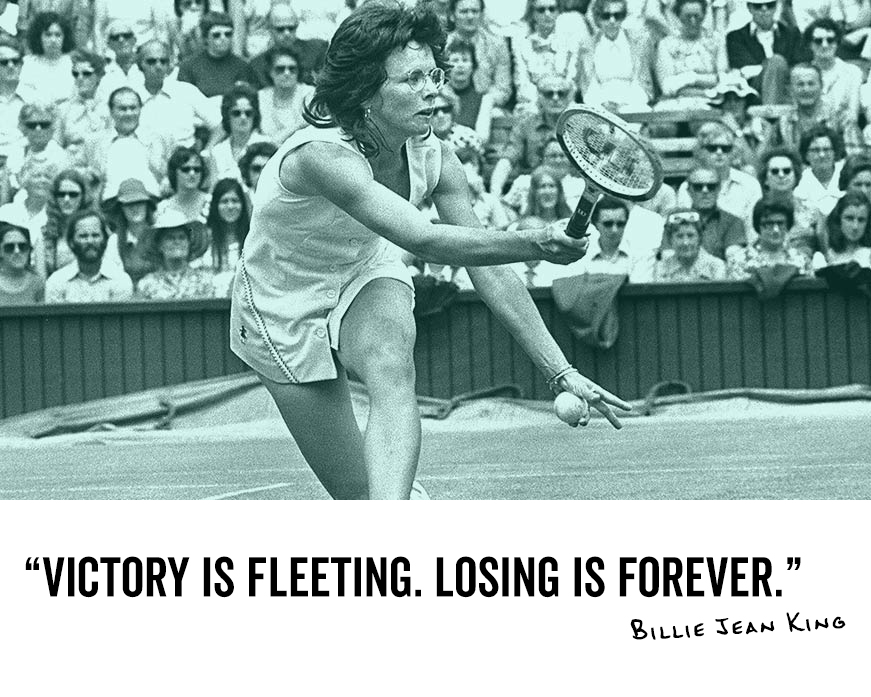 Q: First up, and probably the reason we’re even having this email conversation. Holly Hunter says that you have “always fought the good fight.” What’s the “good fight” now?
A: The good fight is the same for me now as it has been since I was 12 years old. It’s all about equality – equal rights for all, including equal pay for equal work.

Q: Title IX at 45…does it still matter? And why or why not??
A: Title IX is one of the most important pieces of legislation of the 20th century and it is vitally important that we all fight to keep it safe and relevant. While so many think it is only about sports, it is so much bigger. It is about equality and ensuring that all genders have equal access to educational opportunities at all levels.

Q: The research shows that while men are well-liked when, and because, they are leaders, women must usually choose between being well-liked or being a leader. Have you confronted this same choice and can you talk about how you have resolved the conflict between being liked vs being a leader?
A: First, followers choose leaders. Leaders accept the challenge. It is important in business, sports and in life for the dominant group (men, in your example) to have an appreciation, understanding, respect for and real interest in the sub-dominant group (women, in your example). I have always felt we are much stronger when all groups work together to reach a solution. Men need to be open and listen. Women need to ask for what they want and need.

Q: On one of our conference room walls, we have a quote attributed to you, “Victory is fleeting. Losing is forever.” We put it up there sort-of tongue-in-cheek, but sort of not. It’s a strong statement, made stronger still by virtue of the fact that a woman and a champion said it. Do you still believe it? Why or why not?
A: I sure do believe in it. For me, it’s feedback, not failure. We learn from our mistakes and that allows us to advance. But we should also practice our strengths more and make our weaknesses adequate.

Q: This question is about the importance of language in changing habits, minds, and perceptions. So, heroes and sheroes? Can you talk a bit about why it’s important to have a feminine version of hero?
A: We all should be represented and respected. It’s not about “he” or “she” it’s ultimately about “we” and the importance of celebrating one another.

Q: Shifting gears a bit: You came to the game of tennis through the public courts in Long Beach. How did your journey through public courts rather than private clubs impact your development as a person and a player?
A: I think coming from a public parks background helped define the person I became. I was blessed with wonderful and loving, but also disciplined support from my family. We didn’t have a great deal of money, but we were always there for each other. I learned to work hard to achieve my success and I tried my best to learn from my mistakes. I never felt entitled. The public park offered me access to a diverse community of people. I have been supported by so many wonderful people over the years that I know my success is because of something much bigger than myself.

Q: Your favorite state of being? For example, mine has always been competing in a team sport, one with a ball involved where both the outcome and my own contributions matter.
A: Working together and being part of a team effort is one of the best feelings in the world.

Q: And, your current state of mind?
A: Energized and inspired.

Q: Finally, which was your favorite, and least favorite, question?
A: I like the questions where it is about us and not so much about me. 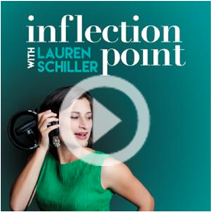 Missy Park, a collegiate athlete herself, shares her experience with Title IX and how she sees the next generation of women and girls benefiting, taking risks and leading.

Inflection Point with Lauren Schiller is a National Public Radio show and podcast featuring conversations about how women rise up.